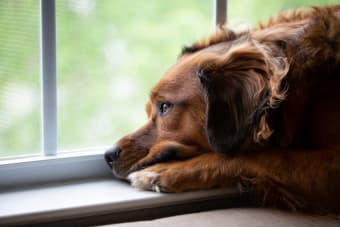 Rabies is a hugely contagious and deadly virus in pets. Luckily, it is preventable with the help of vaccines and other preventive care. Here, our Hermitage vets explain the symptoms or rabies and how to help prevent it from infecting your beloved dog.

Rabies is a contagious, but preventable, virus that impacts a mammal's central nervous system. This disease is transmitted through the bite of an infected animal and can travel from the site of the bite along the nerves until it reached the spinal cord, working its way from there into your pet's brain. Once rabies is able to reach a dog's brain, they will begin to show symptoms and, most often, die within 7 days.

How Is Rabies Transmitted

In the United States, rabies is most often transmitted to pets by wildlife like raccoons, foxes, bats and skunks. This virus can be found in any mammal on the continent. Rabies is most common in areas with high populations of unvaccinated dogs and cats. While cats are the most common domesticated animal to contract rabies, dogs are just as susceptible to being infected by this dangerous disease.

Rabies is transmitted through the saliva of infected mammals and is most commonly transmitted from a bite from an animal that has been infected by the virus. Rabies can also be transmitted if the saliva of an infected animal comes in contact with an open wound or mucous membranes, such as gums. The more contact your dog has with wild animals, the higher the risk of their infection.

What Are The Signs & Symptoms Of Rabies

There are generally considered to be 3 typical stages of infection when it comes to rabies found in dogs. The following are some of the most common symptoms associated with each:

Prodromal stage - At this stage of your dog's infection, they will usually exhibit some changes in their behaviors and personality. If your pet is usually shy, they may become more outgoing (and the same is true in reverse). If you notice any behaviors that are out of the ordinary for your pet after being recently bitten, contact your veterinarian as soon as possible.

Furious stage - The next stage is the most dangerous stage, causing your pet to become nervous and even vicious. They might cry out excessively and experience seizures and stop eating. By this stage, the virus will have gotten to the point where it begins attacking your pet's nervous system, making it difficult for your companion to swallow and creating the classic rabies symptom of foaming at the mouth.

Paralytic stage - This is the final stage in which a rabid dog will go into a coma, be unable to breathe, and unfortunately, most often pass away. This stage usually occurs about seven days after symptoms begin, with death following within usually 3 days.

How Long Does Rabies Take To Show Symptoms In Pets

If your companion is exposed to the rabies virus, this won't become immediately apparent. The typical incubation period of the virus is about 3 to eight weeks. However, the virus may take anywhere between 10 days and a year to appear in certain dogs.

The speed at which symptoms appear depends entirely on the infection site. A bite that is closer to the spine or brain will develop much faster than others and it also depends on the severity of the bite.

Treatment For Rabies In Cats And Dogs

If your pet starts to show the symptoms of rabies, unfortunately, there is nothing you or your vet can do for them. There is no known cure for rabies and once symptoms begin to appear, their health will deteriorate within a few days.

if your pet has received their shots against rabies as a puppy as well as their require boosters whenever recommended by your vet, make sure to provide proof of this vaccination to your vet. If anyone has come into contact with your pet's saliva or has been bitten in the meantime, advise them to contact a doctor as soon as possible for treatment. Rabies is, unfortunately, always fatal for unvaccinated animals, generally occurring withing 7 to 10 days of when their initial symptoms began showing.

If a diagnosis of rabies is confirmed you will need to report the case to your local health department. An unvaccinated pet that is bitten or exposed to a known rabid animal must be quarantined for up to six months, or according to local and state regulations. A vaccinated animal that has bitten or scratched a human, conversely, should be quarantined and monitored for 10 days.

To help ease your pet's suffering, they should be humanely euthanized to help protect them, you and the other people and pets in your home. If your dog suddenly dies and suspect it may have been rabies, bring them to see your vet. They will be able to take a sample from the animal's brain to definitively diagnose your pet.

The best protection against rabies in dogs and cats is to get them regular preventive vaccinations against the disease. Speak to your vet about making sure your pet is up to date on their rabies shots.

Note: The advice provided in this post is intended for informational purposes and does not constitute medical advice regarding pets. For an accurate diagnosis of your pet's condition, please make an appointment with your vet.

Are you concerned that your dog has been exposed to rabies? Separate them from other pets and family members as soon as possible and contact Hermitage Animal Clinic immediately to learn what your next steps should be.